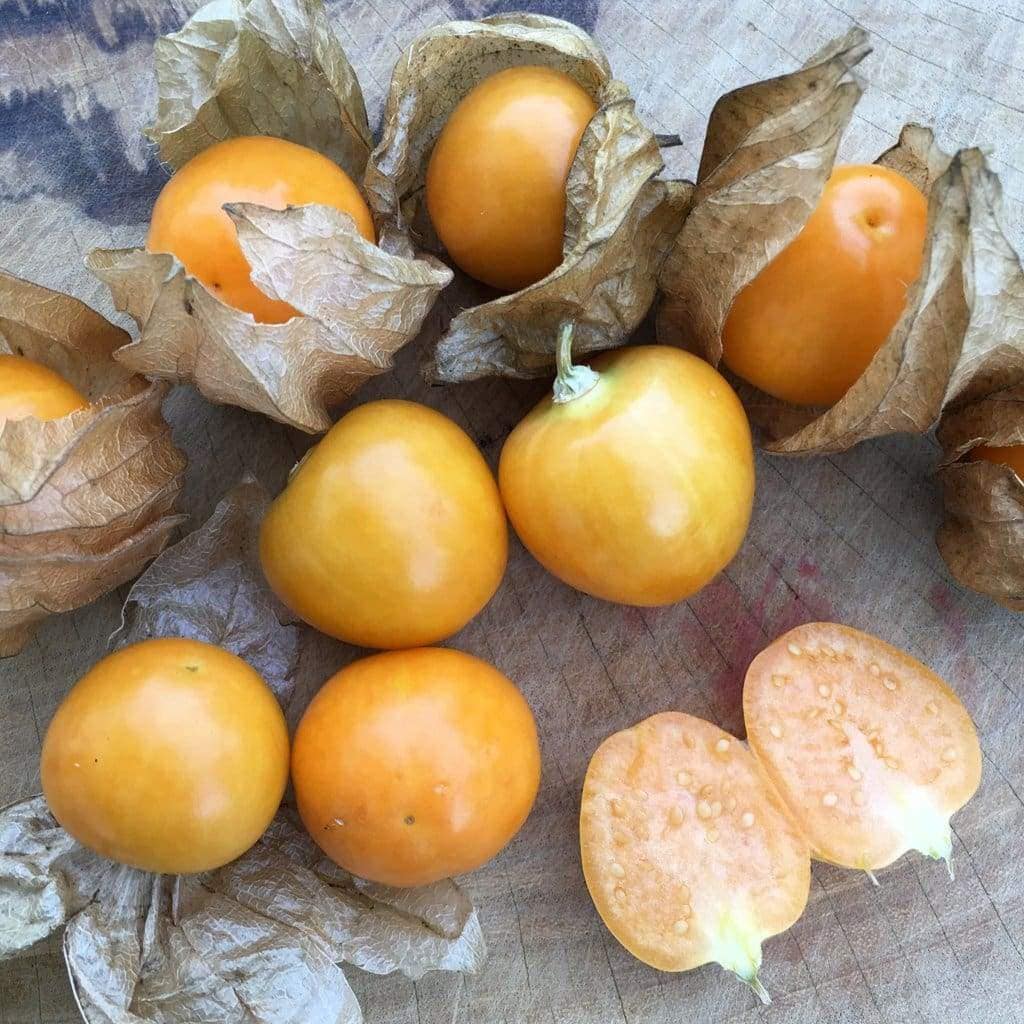 "Physalis peruviana, a plant species of the genus Physalis in the nightshade family Solanaceae, has its origin in Peru. The plant and its fruit are commonly called Cape gooseberry, goldenberry, and physalis in English, in addition to numerous indigenous and regional names. The history of Physalis cultivation in South America can be traced to the Inca. It has been cultivated in England since the late 18th century, and in South Africa in the Cape of Good Hope since at least the start of the 19th century. Widely introduced in the 20th century, P. peruviana is cultivated or grows wild across the world in temperate and tropical regions." (From Wikipedia)

Delicious and nutritious! This is an improved variety called 'Ambrosia'. There are two main species of ground/husk cherry: peruviana and pruinosa. This species, peruviana, grows upright and taller with larger and more tart fruit

These seeds are grown with love and care in Santa Rosa, California by us here at Four Oak Farm. These are fresh seeds grown just this prior season. Germ tested 85%


Feel free to check out my other items for sale as well. Free shipping on orders $35 or more

I'll do my best to meet these shipping estimates, but can't guarantee them. Actual delivery time will depend on the shipping method you choose.

Request a cancellation within: 0 hours of purchase

I don't accept returns or exchanges

But please contact me if you have any problems with your order.

What if a plant arrives non-viable or damaged in shipping?

Unfortunately sometimes shipping is not kind to plants but don't worry, just notify me within 48hr of delivery and I can send replacements to you

Can I pick up my order locally?

Yes you can pick up locally (off of Todd Rd south of Santa Rosa). Send me a message to coordinate the pick up and I will refund any shipping costs

I do my best to provide material that matches listing photos but because plants naturally vary, I do not guarantee size of cuttings/tuber/etc

Can you delay shipping my order until X date?

No, sorry. Because of the complexity it adds to my workflow, I cannot delay orders. Please place your order when you are ready for it to be sent

I'm a beginner; should I order cuttings?

No. Rooting cuttings is generally only for experienced growers with ideal conditions. I do not recommend it for beginners

I don't think I ever received this product. I became very distracted due to personal reasons so there is a chance I lost it which is why I didnt create a ticket with Etsy.

The Peruvian Cherry seeds arrived in good condition and as described. Thanks.

0 items in your cart